Here’s why soymilk is a healthy addition to any diet 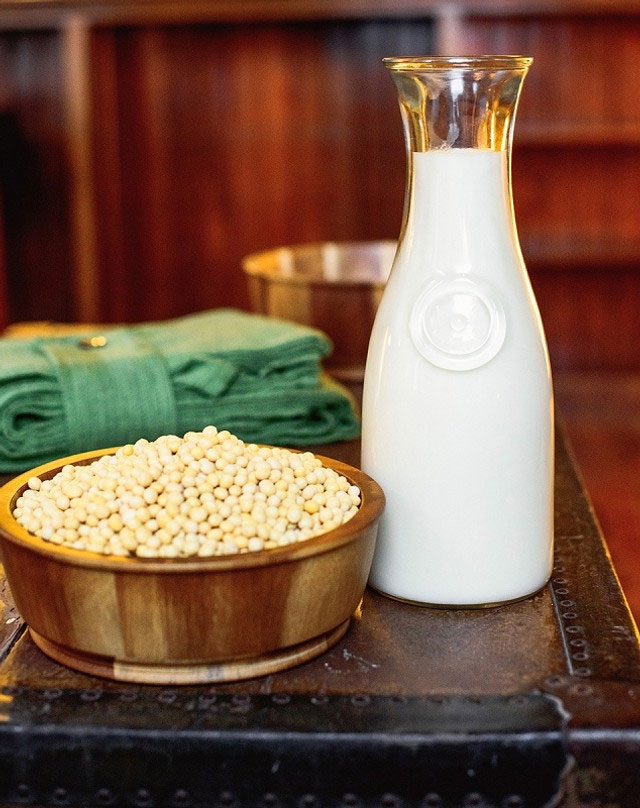 Here’s why soymilk is a healthy addition to any diet

Soymilk has so many health benefits that it’s hard to know where to start.

From those who are looking for a milk option that’s healthier than traditional cow’s milk, to those who due to diet restrictions cannot consume dairy, many are turning to soymilk and discovering its dietary benefits.

Soymilk is not just healthy, it is also as versatile as cow’s milk. It can be added to coffee, smoothies, eaten with cereal – and even used to make delicious ice cream. You can also make tofu with soymilk, which opens up a whole other world of culinary options.

If you have not yet incorporated soymilk into your diet – or could introduce more – then hopefully reading this will help you see why it would be a great decision for your overall health.

Soymilk is made simply from soaking soybeans and then mixing with water. It can even be made from home with your own soybeans.

Since soymilk is totally plant-based, it’s a popular non-dairy option and cow’s milk substitute. Many soymilk brands are fortified with vitamin D and calcium, making it an easy decision to swap with traditional cow’s milk.

Soymilk is the closest nutritional alternative to cow’s milk

Soymilk is not the only alternative to cow’s milk. However, when compared to other alternatives – such as almond, rice, coconut, etc. – it is the most similar in its nutritional value. Soymilk compares well with low-fat cow’s milk.

Soymilk is rich in protein thanks to it containing the nine essential amino acids and being balanced in fats and carbs.

The proteins found in soymilk are made of amino acids that can help prevent heart disorders.

These amino acids, combined with isoflavones that are also in these proteins could also help decrease LDL cholesterol. Soymilk helps better plasma lipid levels in the body, which decreases the risk of heart disease down the road. Some might argue that improving the body’s blood lipid profile is soymilk’s best quality. That’s because it promotes good cholesterol (HDL) and lowers bad cholesterol (LDL).

All the vitamins, minerals, and polyunsaturated fats in soymilk makes it a great choice for heart health, especially for those with heart conditions or a family history of heart-related issues.

Need to lose some weight? Drinking more soymilk can play a role in lowering metabolic obesity in men and in post-menopausal women due to its isoflavones. Waist circumference can also be decreased for those who are obese or overweight. That’s because the monounsaturated fatty acids found in soymilk assist in preventing the intestinal absorption of fat.

Additionally, soymilk is rich in fiber, which can promote a healthier BMI and good cholesterol levels. It is also much lower in natural sugar than cow’s milk. Just be sure to check ingredients of your soymilk, especially if it is flavored.

Combine soymilk with a low-fat diet and throw in some additional soy proteins – and you will be that much closer to a much healthier, leaner you. Plus, soy can help lean muscle mass remain in place when trying to lose weight.

Some studies have pointed toward soymilk’s benefits of providing relief from common issues among postmenopausal women.

The isoflavones reportedly may help promote higher estrogen levels, which is not produced as much by the body naturally during menopause. The lowered estrogen levels can lead to greater risks of heart disease, diabetes and obesity in women. There are also common symptoms of depression, mood swings, insomnia and other issues that arise during menopause that soymilk can help.

This is all thanks to the phytoestrogen in soy.

The phytoestrogen found in soy also helps the body absorb calcium faster and keeps the body from losing bone mass. Some research suggests drinking soymilk could provide some relief from osteoporosis for postmenopausal women.

Be sure to drink soymilk that is fortified with calcium to further promote healthier bones and bone structure.

For example, its benefits for promoting good cardiovascular health are well-known. Since heart disease is a leading health issue for men, it’s no wonder soymilk has become a recommended dietary addition.

Soymilk can also help prevent the risk of developing Type 2 diabetes, which is another common condition among men. This is due to its containing 8.6 percent of daily magnesium needed and 18 percent of the recommended amount of vitamin D in a single cup.

For men who do have Type 2 diabetes, soymilk is safe due to its low glycemic index of 31.

Soy is an excellent antioxidant

The isoflavones in soy act as antioxidants that can help combat other chronic diseases, too. With curdle soymilk or tofu, antioxidant and hepatoprotective properties can help lower oxidative stress and damage.

This is another health benefit in soymilk that could help lower the risk of liver damage in some cases, decrease the negative symptoms associated with menopause, protect against prostrate problems, promote healthier bones and reduce heart disease risk.

Find delicious soymilk for your diet

With all of its health benefits, there’s no reason not to give soymilk a try in your everyday diet. Plus, soymilk is not at all hard to find in grocery stores.

But it is also very easy and fun to make yourself. And with Laura® Soybeans, you and your family can make and enjoy your very own healthy soymilk – straight from our family to yours.

Our non-GMO soybeans are grown, harvested, processed and packaged right on our fifth-generation Iowa farm. When you buy Laura® Soybeans, you can know that they are truly farm-to-table.